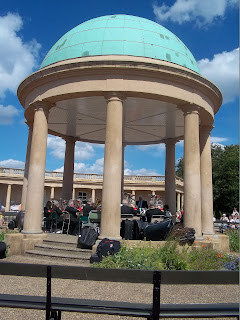 On the afternoon of Sunday 28th July 2013 I attended the Dereham Band Bandstand Concert in Eaton Park, Norwich. This concert was in the series of concerts being organised by Norwich City Council and Brian Dermott on every Sunday from June to August in various Norwich parks.

The Dereham Band was founded in 1931. They are a Norfolk based band playing music for the people of Dereham and the surrounding areas. These days the main musical efforts are centred on their extensive concert engagement diary. Two larger scale concerts are held at Christmas and in the spring for the benefit of band funds.

Those magnificent men in their flying machines, they go up tiddly up up, they go down tiddly down down echoed around Eaton Park on a wonderful sunny Sunday afternoon. We were entertained with Love Conquers Everything and Hey Jude as The Dereham Band had fun on the bandstand.

This was a very enjoyable afternoon in Eaton Park with the Dereham Band sending out their congratulations across the park. There was lots of fantastic music to keep our feet tapping and which greatly entertained the enthusiastic audience.
Posted by Andy Yourglivch at 15:05