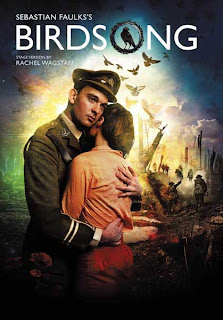 On Saturday 13th July 2013 I attended the matinee performance of Sebastian Faulks's Birdsong at Norwich Theatre Royal. This stage version by Rachel Wagstaff brings the bestselling novel to the theatre which tells a mesmerising story of love, courage and sacrifice set both before and during the Great War.

In pre-war France, Stephen Wraysford embarks on a passionate and dangerous affair with the beautiful Isabelle Azaire that turns their world upside down. As the war breaks out, Stephen must lead his men through the carnage of the Battle of the Somme, and through the sprawling tunnels that lie deep underground. Faced with the unprecedented horror of the war, Stephen clings to the memory of Isabelle as his world explodes around him.

There were fantastic performances from Jonathan Smith as Stephen Wraysford and Sarah Jayne Dunn as Isabelle Azaire at Norwich Theatre Royal as we were taken on an emotional journey. This was a moving and imaginative production that shown an insight to the sufferings and sacrifices made during the Great War. This was drama at its best at Norwich Theatre Royal.
Posted by Andy Yourglivch at 16:19