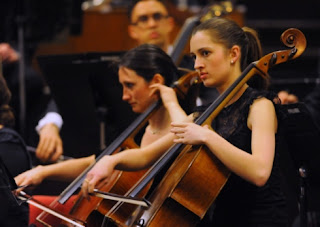 I was back at the Norfolk and Norwich Festival on Monday 13th May 2013 when I attended the Philharmonia Orchestra's concert at St. Andrew's Hall, Norwich which featured David Parry - conductor and Mary Plazas - soprano. This was a celebration of Benjamin Britten's centenary and also a tribute to his links with the Festival.

The programme consisted of Suite, The Sea - Bridge, Our Hunting Fathers - Britten, Sinfonia de Requiem - Britten and Four Sea Interludes from Peter Grimes - Britten. In 1924 Britten heard The Sea, by his teacher, Frank Bridge at the Festival and was knocked sideways. Our Hunting Fathers was commissioned for the 1936 Festival, where it was conducted by Britten himself at St. Andrew's Hall.

The Sea was composed by Frank Bridge in 1910-11 at Eastbourne. This piece is in four movements, each with its own descriptive title. Seascape, Sea-form, Moonlight and Storm. Benjamin Britten's Our Hunting Fathers was the first of the composers acknowledged orchestral song-cycles. This was a collaboration with the poet W.H. Auden, who provided texts for the opening and closing songs.

Sinfonia da Requiem was written by Britten in 1940 as one of several works commissioned from different composers by the Japanese government to mark the 2600th anniversary of the founding of the Japanese dynasty. The work was considered inappropriate for the occasion and was politely rejected. The first performance of Sinfonia da Requiem was given in New York in 1941.

Britten's Four Sea Interludes received its premiere at the Cheltenham Festival in 1945 only a few days after the first performance of Peter Grimes. The Interludes are taken, with slight modifications, directly from the opera. This is one of the composers most popular pieces of music.

It was a brilliant experience to be at St. Andrew's Hall for this concert which celebrated Benjamin Britten's historic links with the Norfolk and Norwich Festival. This was a night to celebrate wonderful music and the Philharmonia Orchestra were on top form to ensure that this will go down as one of the highlights of this year's Festival.
Posted by Andy Yourglivch at 03:12