The Festival Eucharist at Norwich Cathedral 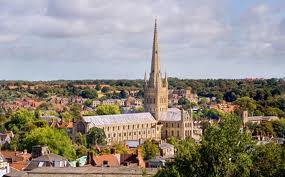 The service used Vaughan Williams' Mass in G minor for double choir and included anthems and motets by Vaughan Williams, Howells and Wesley. It closed with Walton's Coronation Te Derum which was composed to conclude the coronation ceremony and Gordon Jacob's arrangement of the National Anthem.

Norwich Cathedral was full of the pomp and majesty of great choral works from Stanford's Gloria in Excelsis which was composed for the coronation of George V in 1911 to Walton's Crown Imperial march. The Norwich Cathedral Choir directed by Ashley Grote and organist David Dunnett made this a moving and memorable service.
Posted by Andy Yourglivch at 00:03