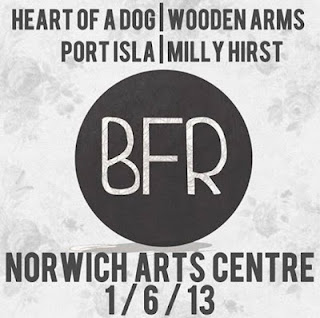 On the evening of Saturday 1st June 2013 I attended the Bare Feet Records Summer Showcase at Norwich Arts Centre which featured Port Isla, Heart of a Dog, Wooden Arms and Milly Hirst. This was a great opportunity for the label to present some of the finest artists they have been working with this year.

Bare Feet Records is an independent record label based in Norwich. They serve as an antidote to struggling independent artists and bands attempting to release their music to a wider market. Port Isla are a four piece Folk-Rock band from Norwich while Heart of a Dog also from the Fine City are an alternative – lo-fi – folk collective.

Wooden Arms are a Norwich based modern quartet while Milly Hirst who is originally from Cambridge, is now a prominent figure in the thriving Norwich folk scene. This was a wonderful mixture of musical styles to make this an interesting and enjoyable gig at Norwich Arts Centre.

During the evening there was the label's tradition of one of the members of the other acts making a guest appearance during each set with one of the best collaborations being Milly Hirst joining Wooden Arms on stage to perform Separate the Verb. Rose was the highlight of Milly Hirst's performance, a truly wonderful song. Wooden Arms gave us a taste of classical mixed with modern, which made for a unique sound.

Both Port Isla and Heart of a Dog gave us a more noisy sound in the second half of the gig which made for a fun time and dancing in the audience. The gig finished with all the acts on stage together greatly enjoying themselves. This was a fantastic night at Norwich Arts Centre showcasing the musical talent at Bare Feet Records.
Posted by Andy Yourglivch at 12:34