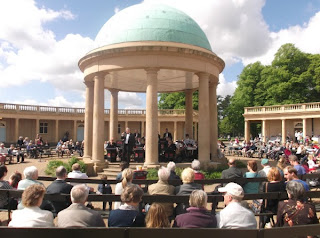 On Sunday 2nd June 2013 I attended the Pavilion Big Band concert on Eaton Park, Norwich. This was the first of this years bandstand concerts organised by Norwich City Council and Brian Dermott, taking place every Sunday from June to August in various Norwich parks.

The Pavilion Big Band was formed in 1998 by a group of talented East Anglian musicians with a common interest in reviving the great sounds of the dance band era. They are an eighteen piece big band which has been entertaining the public in and around Norfolk for well over a decade.

Dean Martin's Ain't That a Kick in the Head was a fantastic opening to this concert and was followed by Have You Met Miss Jones by Frank Sinatra. Van Morrison's Moondance sounded wonderful at the Eaton Park bandstand in front of a large enthusiastic audience. Other highlights included Fly Me to the Moon, Little Brown Jug and Pennsylvania 65000.

This was a brilliant opening concert for 2013 which combined some amazing music with an afternoon of bright sunshine in Eaton Park. The Pavilion Big Band put on a show that went with a swing, perfect for fans of big band music.
Posted by Andy Yourglivch at 12:46