In an Alternative Rock mood! 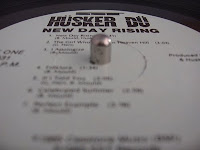 What shall I listen too? Let's see what mood I'm in, well I always seem to be in a Sonic Youth mood! Daydream Nation is always perfect to listen too everyday. Teen Age Riot, Eric's Trip and Silver Rocket are classic Sonic Youth tracks. Then I could listen to Ciccone Youth and get Into the Groove(y)! I love listening to music where the artist is trying to do something different. You could say thinking out of the box.

Pixies are just such an amazing band. Debaser could be the National Anthem of Alternative Rock! Wanna grow up to be, be a debaser, debaser! Everyone should be made to listen too Doolittle in school!

Nirvana took the baton on from the Pixies and when Nevermind was released Alternative Rock took over the mainstream. Smells Like Teen Spirit is Grudge talking to the World! With the lights out,  it's less dangerous, here we are now, entertain us.

My favourite bands from the Nineties has to be Pavement. When I first listened to Slanted and Enchanted I totally fell in love with the band! It's an album with a mixture of DIY ethics and melody. Summer Babe is a classic song and I always have to jump up when Two States is playing.

Arcade Fire's Funeral has to be the best album of this Century. Rebellion (Lies) is a soundtrack to the alternative where the band take the song and twist it into their own unique sound. You never trust a millionaire quoting the Sermon on the Mount but you can trust Win Butler.